Phobias about medical needles are different to phobias about grasshoppers,  the colour green etc.

Having a medical injection may not be the most pleasant experience, but there is a spectrum of needle nervousness. Some people feel OK but are not happy, some have a really morbid fear.

Where would you put yourself on the scale?

10 = I would really rather die than have a needle

If you are in the 8-10 range, then the thought of having an injection probably makes you think twice about going to the doctor. (Take comfort you are not alone. ) Needle phobia is especially an issue if you want to visit a country where yellow fever vaccine is compulsory for travel, plus yellow fever is not a disease to be trifled with.

When the fear is very severe it is called needle phobia. I know of some sufferers who can barely even read the words “needle phobia”. The very nature of needle phobia makes it very hard to determine how common it is in the population. People who suffer from severe needle phobia tend to avoid healthcare settings and so any population estimate is likely to under estimate the true number, but estimates range from 3.5 to 10%. 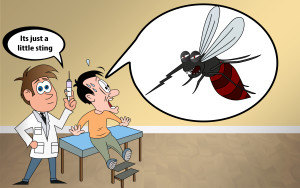 However sufferers do not need to feel guilty – sufferers cannot help it… much of it is genetic,  or learned when one was very young.

In about 25% cases the needle phobia is closer to being like a fear of grasshoppers – it is the result of something bad happening, and the person learns ( not unreasonably ) to avoid that bad thing a second time round.

EG: Big scary grasshopper jumps on child, scares them, so they learn grasshopper = distress, so like good little learners they avoid grasshoppers. By the same mechanism, a child may learn from an experience that ‘needles plus doctors equals pain and distress’.   It can be very difficult to unlearn this kind of association. I have heard some terrible stories – which I won’t repeat here or the needle phobics won't be able to keep reading this blog. I have had patients so phobic that they had to ask friends to preview movies for them .... in case the movie shows doctors and needles as part of the storyline. There  was an electrician who came to do work in the clinic, who could not enter the clinic to do his work because he knew needles were in the clinic.

However, needle phobia is an especially troublesome type of phobia - much more dangerous than phobias of grasshoppers or spiders etc.

Needle phobia is not like a fear of grasshoppers etc ..in two very important ways.

However, it is believed that in our evolutionary past, having a needle (dagger, spear, sword stabbing etc ) meant likely loss of blood. The survivors were the ones who dropped their blood pressure. That meant less blood loss, as their heart wasn’t pumping their life blood onto the sand. Dropping the blood pressure, meant there was more time for the blood to clot, seal the wound and stop the blood loss. Sufferers felt light headed, fainted – and lived to pass on this tendency to their decendants. Many people with needle phobia report a first-degree relative with a strong phobic response. However, despite the apparent evolutionary benefit, the process of fainting is extremely unpleasant for the patient. Subsequent avoidance of needles in this setting is totally understandable.

To reiterate 75% of needle phobics have this type of “fainting prone needle phobia”. This type is known to run in families. There is a big genetic component.  In addition, parents who have this type of "fainting prone needle phobia" are likely to have had unpleasant experiences, and hence are more likely to display their anxiety about needles around their children, and that can make children more anxious about needles, so the spiral of misery and phobia is perpetuated. (As an aside, the best thing for parents to do about taking children for needles is to use humour, talk about something else, and help the child put the little 'sting' into perspective, but that’s another story)

The particularly pernicious thing about this type of “fainting prone needle phobia”, is that when a sufferer get anxious, (about needles, and fainting with needles), they feel the physical symptoms of anxiety: lightheaded, sweaty palms etc,  – so sufferers think they are going to faint, which makes the whole situation more unpleasant and more likely to be avoided. It creates a vicious circle ;  They are anxious about fainting so they develop symptoms of anxiety - which convinces them they are going to faint even before the procedure has begun, so even if they don't faint they feel bad and likely will avoid the situation in future - further reinforcing their phobia.

But,  my needle phobic readers ( or their friends reading this ) – take heart.  The GOOD NEWS is that it is treatable. Good learners can also be good un-learners. Some of my patients say “ Just knock me out, Doc" , or "Jab me after I have fainted”. However, research suggests that using numbing patches or even sedation for needle phobics is not ideal, as it does not allow the sufferer the opportunity to learn the skills to get past their nasty needle phobia.

The treatment for needle phobia is beyond the scope of this blog. It requires professional medical intervention, but successful treatment is available.  Sufferers do not need to suffer. Sufferers can’t help being needle phobic but they can take control of the situation and ask for treatment. …from someone with expertise in this area. The first step is acknowledging and understanding the needle phobia problem... so they can have that yellow fever vaccine ( and the others needed)  and go on that wonderful trip. 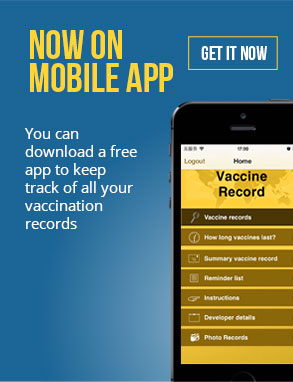 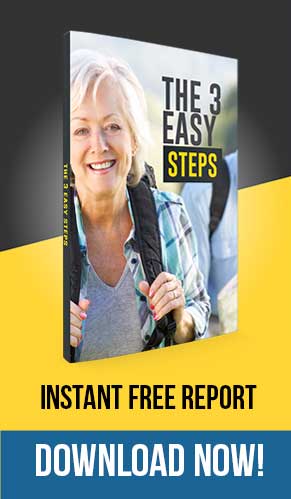